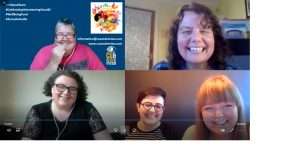 Autism is a condition affecting people’s communication, social skills and the way they process information. Research has suggested there is a link between congenital blindness and autism due to the impact of sight on brain development and social skills in particular. There’s a higher incidence of autism in blind people than in people who can see.

Basically, a team has 3 people who take on a separate role. Initially they work together on a kit of their choosing. There’s an “Engineer”, a “Supplier” and a “Builder”. The “Engineer” has the kit instructions and tells the “Supplier”, who has all the pieces, which pieces to give to the “Builder”. The “Engineer” then tells the “Builder” how to put them together. If there are only 2 in a team, 1 of the roles can be shared or someone can take on 2, e.g. the “Builder” can be the “Supplier” too. The “Engineer” should hide the instructions and has to think carefully how to describe the pieces so the “Supplier” can identify them. For example, they could say “A small circle which is smooth on top”. This helps with language and social skills as the “Engineer” has to think of his or her team members and which language they will understand and relate to. Where a team member has no sight the “Engineer” could be someone with enough sight to understand the visual instructions, or instructions could be provided in “Braille” (Lego® do these). The team would use language to help the blind person identify pieces and build through touch. In all cases, someone works with the team to help with language, disagreements and anything else as necessary. The team members take it in turns to be in each role.

The Therapy is also designed to be flexible, allowing for the use of strategies (i.e. ways of doing things) which help individuals. As an Autism Practitioner I have used it to teach problem solving as a way of dealing with anxiety, conflict and any skills required for this including negotiation and compromise. When using it over video conferencing I’ve divided the roles up differently, so 2 of us have split the “Engineer’s” role with 1 person describing pieces and another explaining how the model goes together. The third person has taken on the 2 roles of “Supplier” and “Builder”.

Using Lego®-based Therapy has proven to be great fun, if hard work at times, and very rewarding for everyone involved.